A few questions might pop up into your mind, like which institutions should you keep an eye on? Is Canada a decent place to get a master's degree? What are the top universities in the Canada? So, here are the answers, Canada and the United States outperform all other nations in terms of educational quality, tuition, programs, scholarships, and post-study job permits. MS from Canada, on the other hand, would be much less expensive than MS from the United States. 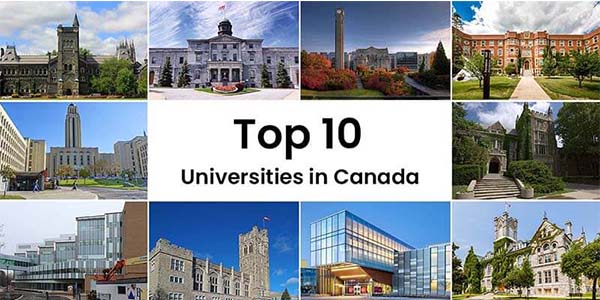 With seven universities ranking in the top 200, Canada provides plenty of opportunities for international students to receive a world-class education. Canada can offer lower tuition fees, simpler application processes, and more permanent residency opportunities after graduation than the United States.

The University of Toronto and University of British Columbia rank very high in research impact, indicating that both schools create high-quality academic work that is widely acknowledged.

Are you interested in exploring the best University in Canada? Read through this article for insightful updates. We have collated a list of top universities in Canada.

Achieve your goals faster! Here's the list of the top 10 universities in Canada

The University of Toronto has around 700 undergraduate programs in the Humanities and Social Sciences, Life Sciences, Physical and Mathematical Sciences, Commerce & Management, Computer Science, Engineering, Kinesiology & Physical Education, Music, and Architecture. The University also provides second-entry professional programs in Education, Nursing, Dentistry, Pharmacy, Law, and Medicine. The institution is divided into academic divisions specializing in applied science and engineering, management, and public health. The University has over 200 masters and doctoral degrees. English is the principal language of teaching. The academic calendars of the three campuses differ. Each campus has student housing, and all first-year undergraduate students are guaranteed accommodations. The institution has about 44 libraries, which store over 19 million physical volumes.

The University of British Columbia is Canada's leading public University. In the World University Rankings 2023, it is rated 47th. It is divided into two main campuses: the Vancouver and Okanagan campuses in Kelowna. The Vancouver campus is larger than the others, housing more than 85 percent of UBC students. In a recent year, approximately 23% of students on the Vancouver campus and around 13% on the Okanagan campus were international. Course fees at UBC vary according to the degree program and are more for overseas students. University housing is guaranteed for first-year UBC undergraduates, and newly admitted international students are also given housing preference in their second year. 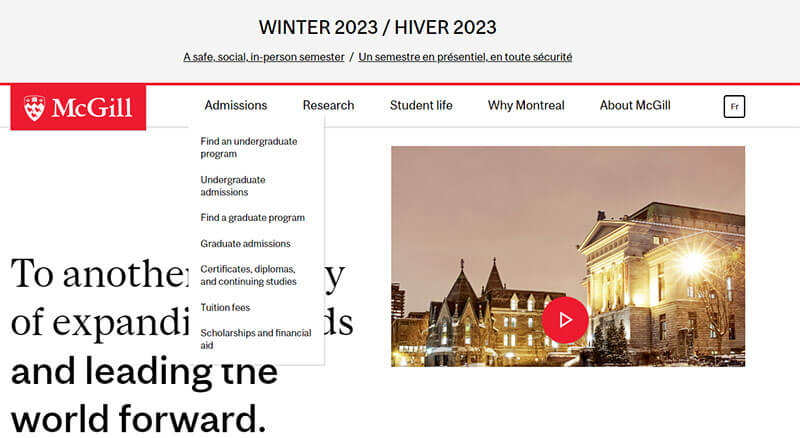 McGill University, located in Montreal, is one of Canada's most distinguished universities, attracting thousands of international students from over 150 countries yearly and having the most significant percentage of Ph.D. students of any Canadian research university. McGill University's renown stems from 50 research centers and institutes, 400+ programs, rich history, and a flourishing global alumni network of 250,000 individuals. Across 10 faculties, McGill University provides nearly 400 Postgraduate programs, including master's degrees, PhDs, MBAs, and graduate certificate programs.

The University has five campuses, four in Edmonton, including the major North Campus, which occupies over 50 city blocks. The Augustana Campus, the University's fifth location, is about an hour's drive from Edmonton in the rural city of Camrose. The minor Augustana Campus, which concentrates on liberal arts and sciences, has about 1,000 students. The institution provides courses in various fields, including arts, business, engineering, and medicine. With the exception of the University's Campus Saint-Jean, where French is the predominant language of education, English is the primary language of instruction.

The main campus of McMaster University is located in a suburban neighborhood of Hamilton, Ontario, near the western shore of Lake Ontario and not far from the US border. There are another downtown Hamilton, Burlington, Kitchener-Waterloo, and Niagara campuses. International students at the University come from more than 75 nations, while full-time faculty members come from more than 55. Engineering, health sciences, humanities, science, social sciences, and the DeGroote School of Business are the University's six main academic divisions, and English is the predominant language of instruction. McMaster University also has an arts and science program that enrolls approximately 60 students annually and provides a more integrative undergraduate experience. McMaster undergraduates follow a semester-based academic calendar with an optional spring/summer term.

The University has affiliations with the business school HEC Montréal and the engineering school Polytechnique Montréal. The University and its affiliated schools are in Montreal, Quebec, one of Canada's most populous metropolitan areas. Approximately one-fourth of all students at all three universities are graduate students. Full-time undergraduate and graduate students can live on campus. UdeM, as it is frequently referred to, contains more than a dozen academic divisions spanning the social, natural, health sciences, arts, and humanities. However, French is the primary language of instruction, and numerous graduate programs, including Ph.D. programs in biochemistry, neurology, and pharmacology, welcome English-speaking students. 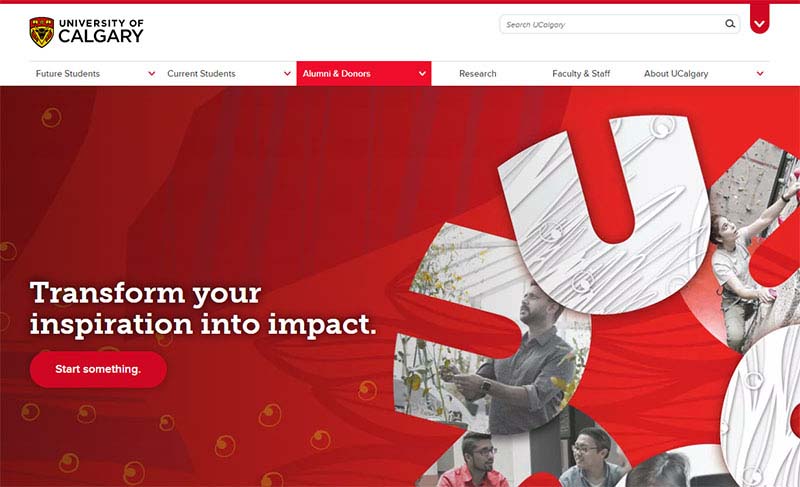 The main campus of the Canadian University is located in Waterloo, Ontario, close to three Great Lakes and the US border. The institution also has satellite campuses nearby in Cambridge, Kitchener, and Stratford. The University has almost 30,000 students. Both undergraduate and graduate students have access to university housing. The University's academic divisions are as follows: applied health sciences, arts, engineering, environment, math, and science. Conrad Grebel University College, Renison University College, St. Jerome's University, and St. Paul's University College are four associated university colleges on the main campus where students can pursue a Waterloo degree in a smaller academic environment. The University also offers combined degree programs with global universities in various countries, including Tsinghua University in China, National Chiao Tung University in Taiwan, and the University of Warwick in the United Kingdom. The Water Institute, the Waterloo Centre for Automotive Research, and the Mike & Ophelia Lazaridis Quantum-Nano Centre are just a few of the University's research institutions.

Students with broad worldviews who want to study, interact in, and lead in international societies are drawn to the University. Students from 117 countries participate in classroom activities and study-abroad, research, and service opportunities to enrich their perspectives and expertise. Academic excellence is balanced with athletic, volunteer, and social action options, fostering a vibrant community of more than 277,000 alumni worldwide. Western researchers use $235 million in annual research funding to inform policy and share knowledge on a global scale. International collaborations are involved in more than 60% of research papers. 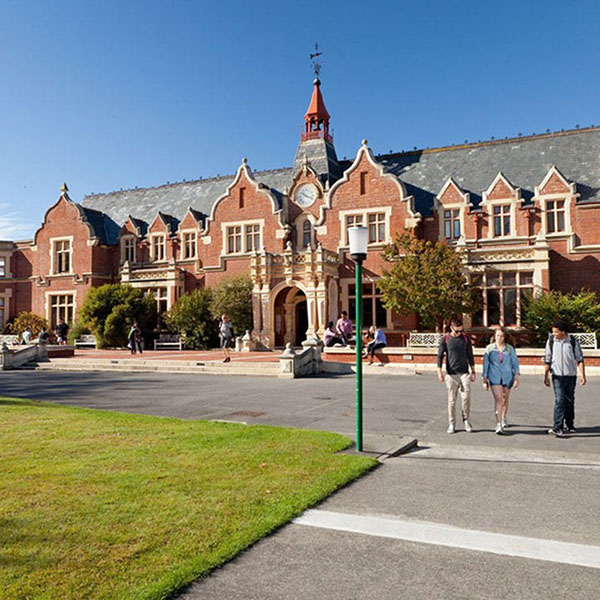 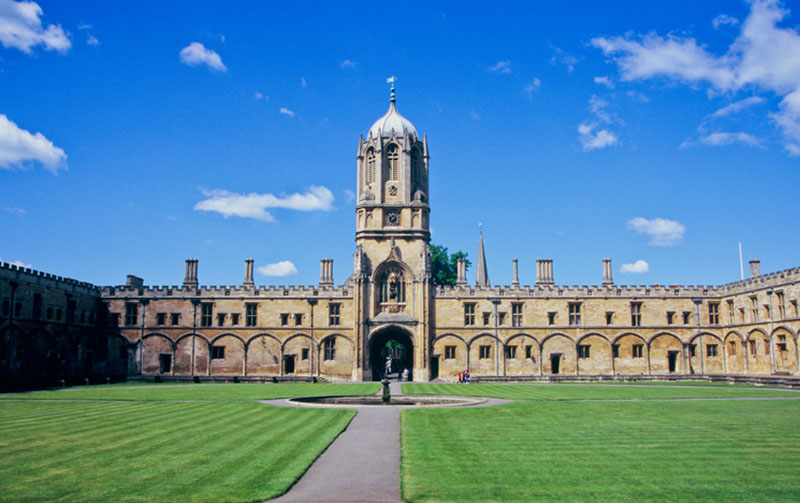 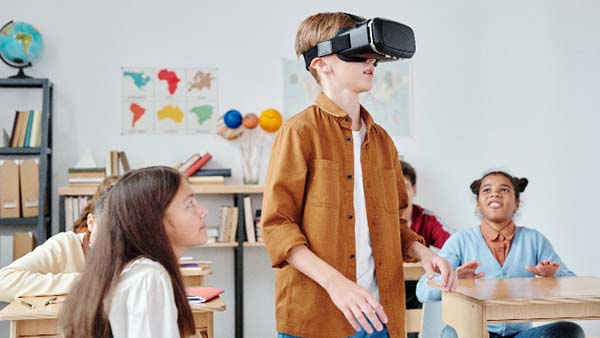 The Metaverse In Education - Lessons Get Converted Into Virtual Reality